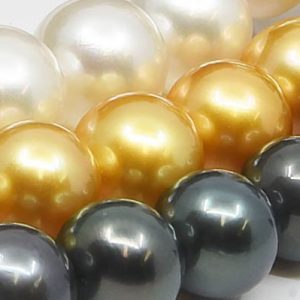 South Sea pearls are cultured using Pinctada maxima oysters (also known as the silver-lipped, or gold-lipped oysters). These oysters produce pearls from 8mm-20mm in size. Color range includes: white, silver and gold. This type of oysters are mainly found in Australia, Indonesia, Myanmar and the Philippines. White South Sea pearls are often regarded as the queen of gems while the golden pearls (natural color) are the rarest of them all.

The Most Exotic of them All

Tahitian pearls are cultured from Pinctada margaritifera oysters (also known as the black lip oysters) found in French Polynesian waters. Black cultured pearls come in the widest range of colors: metallic silver, gray, blue, green, eggplant/red(ish) and jet black. The rarest and most valuable color for Tahitian pearls is peacock which as it sounds, has the overtones of the peacock. Strong blue, green or aubergine tones is a very rare find. Tahitian pearls have been highly prized by many cultures for their exotic colors and brilliant shine.

As the name suggests, Fresh Water pearls are cultured in sweet waters such as rivers and lakes. The largest producer of these pearls nowadays is China using the Hyriopsis cumingii mussel, also known as the “Triangle sail mussel”.

As opposed to saltwater pearls, these mussels can produce dozens of pearls each harvest. These pearls have substantially lower production costs due to more forgiving climate, their geography as well as the number of pearls per harvest. Their natural colors are pastel purple, pink, orange etc. and they are often chemically treated, processed and dyed to resemble saltwater pearls.